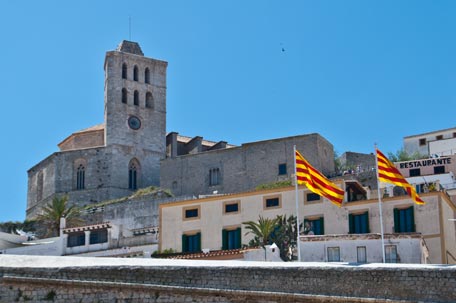 When one hears of Ibiza, the first thing that comes to mind are incredible fiestas and collected coves. Summer tourism has eclipsed the other Ibiza. There is no other way to explain that until the end of the last century was not discovered the historical importance of the walls of Dalt Vila, the upper town of Ibiza. Stroll in the evening between the streets means a trip to the most unknown past. On an old Arab area has been built a unique piece of defensive site which remains almost intact. Between streets, five centuries of history and legends have preserved buildings despite the attacks and explosions that has suffered.

Out of the wall is not to abandon the past, as the necropolis waits for us to remind us that there was life much before. The Phoenician and Punic period I think her sanctuary at the foot of the hill that today presides over the city. The Phoenicians left their tracks next to the salt mines of the past converted into protected nursery.

The isolation of the peninsula kept intact the tradition and customs. Local pottery, ancient tradition, is still present in some parts of Sant Rafael. Gastronomy still uniting the resources of the Earth for flavor in the purest Mediterranean style. At parties, Dirndl and native music, remind us that there was a source, and that something has been us. The Ball Pagès is cultivated from childhood and is present in all events. Sant Mateu brings traditional Ibizan wine, the perfect drink to accompany the Sobrassada and bread Payés.

Much has changed history. But it has changed most tourism in Ibiza. A place revered by the hippies who found the lost spirit of Es Vedrà and stayed to worship him, leaving their mark on the Atlantis of Cala D’hort.

And much has changed the island. Where there were locust beans and sheep today rise hotels and bed and breakfast. But nor the tourist maelstrom has failed to erase the traces of a history which, even today, is much undiscovered.