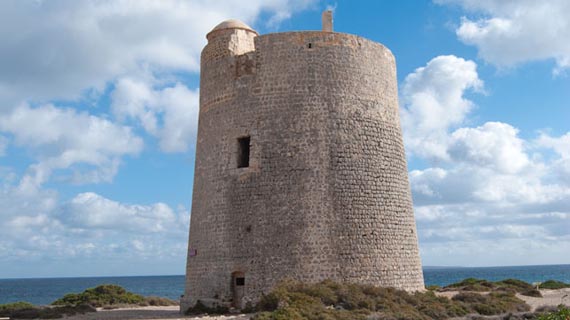 The best way to ensure us a panoramic view when we arrived in Ibiza is to seek any of its defensive towers. These defensive emplacements were located in strategic points allowing the visual communication between the own towers. Before the arrival of any danger is gave notice to the population that is protected in the churches fortified. The situation of these towers should allow therefore a field of vision it more broad as possible. Tower of Ses Portes complies to the perfection the committed.

Ses Portes Tower is located at the southern end of the island of Ibiza, between the beaches of Es Cavallet and Ses Salines. Not likely to get lost to find it, but the hike is assured. While can take the beach of is Cavallet and walk in direction to Formentera, the journey by the sand is makes heavy and something painful for them ankles. To the end the beach begins a stretch of rock something more hard that is appreciated. After spending a couple of soft mounds the Tower starts to make visible. When you arrive at Torre de Ses Portes and see people walking with their dogs and watching you with strange face, you realize that was not the best choice. And no it is.

We can find the access that we recommend in Ses Salines, more commonly known as the Salinas beach. Once we get to the beach will try to park in the parking that runs parallel to the sand. Starting from this point we can take two paths, field or beach.

If we choose to go through the field, take the cut road traffic that is behind the pines, then of the parking. It’s a comfortable ride used by cyclists and, above all, people out walking their dogs. By the way, we will find Sa Trinxa well alongside old drinking trough, built in sandstone.

If our choice is to skirt the coast, the road becomes more uncomfortable, but you can enjoy small and curious coves. After crossing the beach, much more small that is Cavallet, find a trail that runs parallel to the coast. The stone has been sculpted by giving rise to strange figures near the water. In any case, you can take a path to the ida and another around the corner.

SES Portes is a point strategic in Ibiza, not only by the presence of the salt mines. Also the step of is Freus, a stretch Rocky of the sea characterized by its strong currents, separates Ibiza and Formentera. The economic importance and the domain of step got install this tower much earlier than the rest of defensive formations of the island. Their presence is known already in the 16TH century, but it will be two centuries later when it adopted the current form, more in line with the rest of the island towers.

Ses Portes Tower is one of the few towers that were equipped with cannons to avoid pirate raids and attacks on boats from Formentera. With full communication visual with the Tower of Formentera, S’Espalmador, watched all the South of the pitiusas.

Can find more information, pictures and map on our tab of Tower of Ses Portes

Archaeological Museum. A treasure to be discovered in Ibiza.