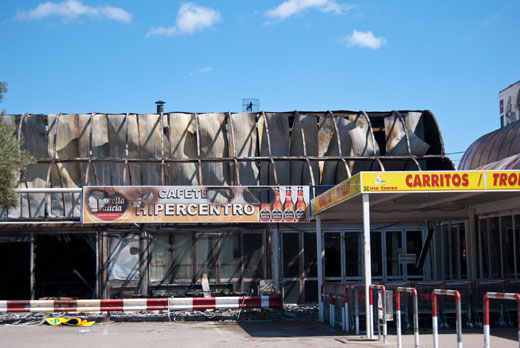 A section of the Hipercentro de Sant Antoni is burning

This morning we have been surprised by the news of a fire of considerable size that has affected the, on the road linking Sant Antoni Ibiza. Thing that few have guessed safe is the severity of the fire. We have passed ahead of the section that has burned about two in the afternoon, when still working firefighters to prevent fire will revitalize.

An entire section of the Hipercentro de Sant Antoni razed to the ground.

The fire has come from the cafeteria, to the very gates of the Hipercentro de Sant Antoni, until the end of the ship. Along the way the shop decoration of gardening, the sofas and mattresses, has been ahead a small Bank Office and probably the most irreplaceable loss. A pet shop, which we had the opportunity to visit several times. Unfortunately it seems that none of the animals has managed to survive the flames. We have seen on the ground completely twisted irons of the cages.

As he cites the diariodeibiza.es, the first warning of the fire to the 112 was carried out at 3:38, where firefighters, local police and the emergency department moved. The intensity of the flames forced reinforce the device and vacate fifty persons of twenty adjoining homes. The most affected, the home of the owner of the cafe, located just above the own cafe.

At five in the morning the fire was extinguished.