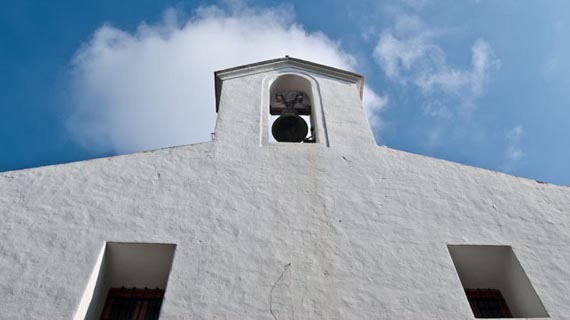 An of the churches less known by the public in general is the . It may not to be in the heart of the city of Ibiza forcing us to express shuttle to visit make you lose some of your interest. Local people known more for typical events (weddings, baptisms and communions) BBC for its historical and cultural interest. But are six centuries of stories and legends that endorse this building. More than enough to engage us for their construction and, of course, the religious works that decorate the interior.

Where is located the Church of Jesus in Ibiza

Jesus is located to some three kilometers of the Cathedral of Ibiza and to a kilometer and half of the beach of Talamanca. We can find the Church of Jesus in the town centre. Although today in day Jesus is nothing more than a quiet town and a good place to eat, until recently was a place to Santa Eulalia. Traffic grain towards Santa Eulalia Mills gave him an important relevance. But also did the proximity with the beach closest to the center of the city vulnerable to marine incursions. The construction of a square defensive was of vital importance.

History of the Church of Jesus, Ibiza

The first references written date of the year 1466, when is requested permission to the Archbishopric for to celebrate mass. Its first inhabitants were Franciscan monks who were commissioned to carry out some reforms and enlargements on 1549 and creating the monastery of the brotherhood of the Virgen del Rosario. Invasions pressure makes the institution moves to the inside of the wall in 1587, where the Defense becomes an easier task. Goes to be to late of the century 18TH, in times of peace, when the Church recover its splendor thanks to the Bishop Abbot I Lasierra and its plan for approach the faith to the people. In this occasion they used the own monastery.

The building is of the more unique of the Ibiza ecclesiastical. The front is particularly wide, with a porch attached to a fairly atypical side. On the entrance gate remains the image of the Virgen del Rosario. Two small windows interrupt the façade main until arriving to the Bell Tower. The vicar and the rectory extend on the side opposite to configuring a unique façade.

The interior of the Church preserves many images inside of remarkable interest, some spread across its six chapels. Which more tourists accumulate, the altarpiece of the century XV-XVI that is is presiding over the altar major. It also highlights a canvas of Santa Clara and an image of the Virgin of the 17TH and 16TH centuries respectively.

As always you can find map, information and photographs on our tab of the Jesus Church in Ibiza.