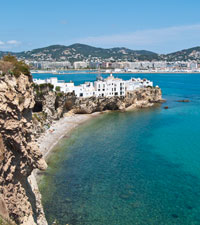 It is curious to check the descriptions of Wikipedia on Ibiza in different languages. Maybe this can give us a different perspective according to the tourists who visit our island. We started a series of articles to give you a free translations of all commenting on Ibiza. You can find the English version on the pages of Wikipedia about Ibiza

Eivissa or Ibiza is an island in the Mediterranean Sea about seventy-nine kilometers from the coast of Valencia, Spain. It is the third largest of the Illes Balears, an autonomous community of Spain. With Formentera, is an of the two islands of pines, or Ibiza and Formentera. Their cities more important are the city of Ibiza, in catalan Vila d ‘ Eivissa or simply Vila, Santa Eulara des Riu and Sant Antoni de Portmany. Its highest point, also called Sa Taliassa or Sa Talaia, is four hundred and seventy-five meters, the equivalent of one thousand five hundred and fifty-eight feet, above sea level.

Although the official name is catalan, Ibiza, the name in Spanish is Ibiza. In English British the name is usually to pronounce from a form similar to the Spanish (ɪbi ː θə, ɪvi ː θə) while in English American the pronunciation is seems more to it of America Latin (/ ɪbi ː zə / / i ː bi sə /)
The island is known for the summer festivals of the discotheques that attract large numbers of tourists, but the island and the Spanish Tourism Office have been working to promote family tourism. Despite the controversy on the island by the ability to attract more low-income families in large quantities, due to the lack of professionalism in the hospitality sector, the island is prepared to dispel its image as a single destination for night owls youth. The clubs include Space, Pacha, Privilege, Amnesia, DC10, Eden and Es Paradis. Probably the most famous island bar is Café del Mar. This bar is strongly linked to the genre of Chill-Out music. The other great featured in the world of entertainment in recent years has been Ibiza Rocks, proud to bring music back to the island. Brand now direct young people from the most famous hotel on the island, Ibiza Rocks Hotel.

Translator’s Note: the English who visit the island are concentrated in the town of Sant Antoni, where, except for nightclubs (with the exception of Es Paradis and Eden), the mentioned premises. Almost all come through companies touroperadoras where the owner of the accommodation prices are agreed upon. This type of accommodation do not correspond with where they can be found throughout the island.

In 654 BC Phoenician settlers founded a port in the Balearic Islands known as Ibossim (from the Phoenician ibshim dedicated to the God of music and dance Bes). It was later known to the Romans as Ebusus. The Greeks, who came to Ibiza during the time of the Phoenicians, were the first to call the two islands of Ibiza and Formentera the Pityussai (Πιτυοῦσσα), “pine-covered Islands”, a translation of the Phoenician name. With the decline of Phoenicia became the Assyrian invasions and Ibiza was under the control of Carthage. During this period the island produced dye *, salt, wool and fish sauce.

Translator’s Note: in Ibiza have been found remains of ancient ovens for the manufacture of colouring, extracted from shellfish on channel d’ Martí, also known as Pou des Lleó.

An altar with offerings to the goddess Tanit was established in the Es Culleram cave. The rest of the Balearic Islands came into contact with Eivissa from the year 400 BC. Ibiza was a significant trade along the routes of the Mediterranean. Ibiza began establishing their own stations of trade with the rest of the Islands in the Balearic Islands, mainly with Mallorca, where they recruited numerous Slingers as mercenaries who fought for Carthage.

During the Second Punic War, the island was assaulted by the two brothers Scipio in 209 BC but remained loyal to Carthage. Ibiza was used by the defeated Carthaginian general MAGO, where picked up supplies before departing to Minorca and then Liguria (region of Italy). With the arrival of the Romans, Ibiza negotiated a favorable treatment that prevented the destruction of the conquest and allowed him to continue with their Carthage-Punic institutions. This explains because Ibiza offers today day excellent examples of civilization Carthage-Punic late. During the Empire Roman, the island is developed in a since of outpost of the Empire, located in a region quiet and remote of the routes commercial of the time.

After the fall of the Roman Empire, and after a brief stint vandal and Byzantine, the island was conquered by the Moors, as well as much of the Iberian peninsula. Low it law Islamic, Ibiza came in contact with the city of Denia (the port more close of the peninsula Iberian located in the community Valencian, with what Ibiza entered to form part of the taifa of Denia.)

Ibiza, next to Formentera and Menorca, was invaded * by the Norwegian King Sigurd I of Norway in the spring of 1110 in his crusade to Jerusalem, after conquering the cities of Sintra, Lisbon and Alcácer do Sal, which ceded control to the Christians in an effort to weaken the control of the Muslims in the Iberian peninsula.

* Author’s note. Ibiza and Formentera were invaded and devastated, but not conquered.

The island was conquered by the Christian with the King Aragon Jaime I of Aragon in 1235. Since then the island has had its own Government in various forms, but in 1715 King Felipe V of Spain abolished the autonomy of the local government. The Statute of autonomy of the Balearic Islands was established with the arrival of democracy in the early 70’s. To day of today, Ibiza form part of the community autonomous Balearic together with Mallorca, Menorca and Formentera.

Ibiza is the largest group of islands in the western part of the Balearic Islands, known as the Pitiusas. The Islands Balearic Islands are composed by a set of more than fifty Islands, many of which are uninhabited. We find the highest point of the island at Sa Taliassa (Sa Talaia) 475 meters.

(Summary). Ibiza belongs to the area known as climate tempered. The temperatures maximum along the year oscillate between them fifteen degrees of January and the thirty of August. Minimum temperatures range between eight levels of January and the twenty-first day of August. The precipitation increase to end of year, descending to first of year to get to few days rainy in June, July and August *. During the months of July and August the maxims of solar hours with 335 and 302 respectively occur. We find the minimum in December with 148 hours, giving a total of two thousand seven hundred thirty-two hours of sunlight per year.

Demographically, Ibiza has a very particular configuration. Census agencies differ on the exact figures. According to the national census of 2001, there were eighty-eight thousand inhabitants in Ibiza (against seventy-six thousand in 1991, sixty-four thousand in 1981, forty five thousand in 1971 and thirty-eight thousand in 1961). However, two years later, this figure increased to one hundred eight thousand inhabitants and in 2010 it had reached the one hundred thirty-two thousand. This rapid growth is due to the amnesty which incorporated a large number of unregistered foreign migrants. In terms of origin, around fifty-five per cent of the residents of the island he was born in Ibiza, the thirty-five percent are immigrants from the mainland Spain (especially Andalusia working-class families, and the rest of Catalonia, Valencia and Castilla) and the rest, between ten and fifteen percent to foreign immigrants , with dual citizenship or community. In descending order, foreigners are Germans, English, Latin American, Moroccan, French, Italians, Dutch and a wide range of nationalities. This mosaic reflects the fluidity of foreigners who live and move across the island, so it is impossible to quantify accurately the foreign population.

The native language is catalan, along with Spanish, the official language of Ibiza. However on the island a dialect called Eivissenc or ibicenco is spoken. Influenced by tourism and foreigners, other languages like English and German are spoken. Multilingualism is the norm, not the exception.

Ibiza is considered a popular tourist destination, especially due to its sometimes legendary nightlife and rampant around two areas. The port of the city of Ibiza, in the side South, and Sant Antoni, in its part Western. The best nightclubs are Privilege, Eden, Es Paradis, Amnesia, Space, Pacha, underground, Gala Night and DC10. During the summer, major producers and DJs from the Dance come to the island and punctured in several clubs. Some of the most famous DJs have their own nights a week, using Ibiza as a starting point for the presentation of new House, Trance and Techno songs.

Since 2005, music live from Ibiza Rocks has helped to redefine the landscape of the island. Bands such as Arctic Monkeys, Kasabian, The Prodigy and the Kaiser Chiefs have played in the courtyard of the Hotel Ibiza Rocks. During them last three years the chain of the United Kingdom BBC Radio has Center your weekend in Ibiza relaying from this place, and as result, the island is now view as a place more different, and not only sex and drugs.

Traditionally, the season begins in early June with the opening of Space and DC10 and ends the first weekend of October with the closure of the big clubs. A typical program for clubbers to Ibiza includes Awakenings at noon, disco NAP early in the afternoon, night clubs and sunrises. Due to the remarkable tolerance of Ibiza misbehavior of adults and young tourists, has acquired the name of ‘Gomorrah of the Mediterranean’. Also is known the coffee of the sea, a place where many tourists come traditionally it put of Sun with music of José Padilla. Other bars will have developed in places each time more popular to the pre-club after the sunset.

He Government of the island is trying to of foster a tourism more silent and cult, applying standards as the closing of the clubs to them six of it tomorrow as very afternoon, and requires that all them new hotels are of five star. The Administration wants to attract a more international mix of tourists.

* Author’s note. We do not know the legislation on new hotels, but it is true that the Administration banned the After Hours and decreed the closure of discos at six in the morning.

Ibiza World Heritage of the humanity

Although Ibiza is known mainly for his party, a large part of the island is registered by the United Nations as a world heritage, and therefore protected against the development and marketing of big cities. A notable example is the “finger of God” in Benirras Bay, as well as some of the most cultural and traditional Ibizan sites. Because of its rustic beauty, companies and artists frequently used the island and carried out photographic sessions. A (“the egg”) monument erected in honour of Cristóbal Colón is located in Sant Antoni. Ibiza is one of the many places that pretends to be his place of birth.

Ibiza is administratively part of the autonomous community of the Balearic Islands, whose capital is Palma, on the island of Mallorca. Ibiza has five sixty-seven municipalities of the community. In a clockwise direction they are:

The cuisine of Ibiza is typically Mediterranean. One of the typical products of the island are known as flaons sweets.

And up to here it wikipedia British. This information is freely translated from en.wikipedia.org and far from considering the accuracy of the information, we can understand how they see and live Ibiza in the United Kingdom.