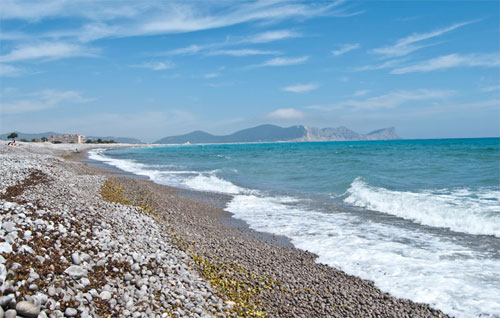 It is curious as sometimes, according to the literal translation of the name of a beach or Cove, we discover its physiognomy. The des Codolar beach is a clear example. A Codols, comes to be a stone of rounded edges. And this is what we find in the Beach des Codolar, rounded edges where everyone expects sand. However, one takes a little time to get used to the towel lying on this mantle, and begins to appreciate the sound of the sea over thousands of small stones. A constant run run is one of the most secluded beaches in Ibiza.

How to get to the beach des Codolar Ibiza.

Depending on what wait find can take two roads. The first, across the road from the salt industry, where a detour brings us to the end closest to the Natural Park of Ses Salines. This point is quite known by having a bar quite chic (who says chic, says caro) in this end. It is common to find luxury cars through a small road to the sunset. Perhaps one of the most beautiful landscapes of Ibiza are sunrises offering West Coast. And is Colodar has just this orientation.

The other point of access it found on the side opposite of the beach. And has three kilometres in width. This access is something more complicated than the previous one, because we have to take the road that links the airport with Sant Josep de Sa Talaia. A kilometer approximately, we found a deviation to the left marking Cala Jondal. It is the same road by which we access Sa Caleta. To the principle has some good curves that end up leading in the only supermarket that will find for the area. Some metres before will find a road of land that US leads to the home of the Beach.

I think it is Codolar was one of the first beaches in which I had the opportunity to bathe. The impression when entering the beach is a bit rare for which we are more accustomed to the arenal. It is as if we pisásemos large ball pool, but not to harm us. Access to cars is prohibited almost upon entering the beach. It is an area which is not only protected for their ecological value. It is also against the airport landing strips. If the wind will be a delight to see landing and take-off the aircraft.

On this side, there is a beach bar. Small and cozy, integrated with the landscape, but few, very few hassles. Also you will find remarkable services. There are sun loungers and parasols. Jet skis have more remote beaches. There is no monitoring, nor is it to make him miss. There are no beacons. There is absolutely nothing. If we define nothing like a Virgin paradise during the coast, with a low pine forest behind us.

The water is very salty, and it burns a little, almost as much as in the salt mines. To bathe, the stones occupy even a good stretch until they disappear, giving way to a sandy bottom fitted with marine species of all kinds. Some mornings I’ve seen from a nearby House, as the dolphins still thrived at ease in the middle of the large coastal Bay that forms. It is a superb show, I can make it.

The playa des Codolar is a not suitable for the typical tourist place. It is a place for those seeking absolute quiet and contact with nature. It is a place where the only thing annoying is to scroll through the stones. But if this is not a problem for the reader, the des Codolar beach is a paradise. A place for a privileged few that are supported on the rocks waiting for the Sun.