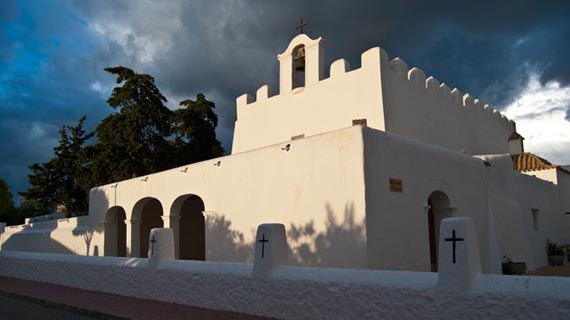 There are the cultural Ibiza during his visit to the island not to be missed. The churches, by their relevance historical, social, and by find is in the Group of buildings ancient best preserved, are a point of step obliged.

History of the Church of Sant Jordi

The Church that today we occupies is an of the more ancient of Ibiza. The Church of Sant Jordi de Ses Salines is located in the heart of the town of Sant Jordi, in the old airport road. Doubts about the date of its construction have. The first written references that we belong to the 16TH century but their construction seems to revolve around the Catalan conquest, in the 14TH century. The reason of their construction is that less doubts seems to have. Until the construction in the century 18TH of the Church of Sant Francesc, the Church of Sant Jordi was the church more close to the salt. Salt extraction was not only one of the main economic activities on the island, also was one of the main causes of mortality. But the salt not only brought diseases and wealth, also attacks and raids from of the Mediterranean.

To reach its current appearance, the Church of Sant Jordi de Ses Salines underwent major modifications. In origin the plant was square, with thick, high walls topped with battlements of Ghibellines merlons. The input main is located in what today is as the entrance to the sacristy, in the wall South. The wall North is it only that not offers its face washed. Them windows not are a good idea when talk of protect a fortin although found an in it face West, just under the Bell Tower and the main door of access today day.

With the arrival of less bellicose times church underwent important modifications, to adopt a cross-shaped form with the incorporation of the chapel of the Rosary and the chapel of the heart of Jesus, in the North wall and the chapel of Santo Cristo and the old, converted into the present sacristy porch. The entry adopted a double porch with three arches creating a typical print.

As arrive to the Church of Sant Jordi

The form more comfortable of access until the Church it found taking the deviation in the road that unites Ibiza with the airport in address to Sant Jordi. After crossing a placid town we can see the Bell Tower just before reaching the roundabout that puts an end to Sant Jordi.

You can find more information, map and photos on our tab of the Church of Sant Jordi