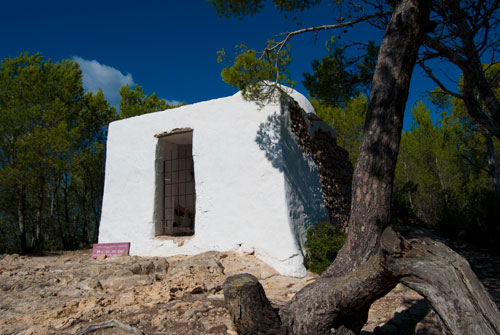 This morning has been somewhat curious. We have been in the municipal district of Eulália, and as you spare us some time, we again find the Chapel of Puig d’ in Ribes. And say “have returned”, because is the fourth time that we try to find the chapel.

Finding the path to the chapel of Puig d’ Ribes

If one takes the coffee, or simply gives a stroll in the Centre of Eulália, next to the taxi stop will find a sign with directions to the various points of interest found in the area. Puig de Missa is a clear example, as well as the Ethnological Museum, or the Barrau Museum, dedicated to the painter. These indications include the Chapel of Puig d’ in Ribes. As well, if one follows the official signs, reaches the roundabout of entrance to the town, which is fine. Hence, a new brand that it leads us to a crossroads without more signs. If we take the path on the left, will see the band d’ in Ribes. Very nice, but the chapel or trace. If we take the path to the right, we find a signal on the left side of the road, that tells us that we have spent.

As a band, we had visited it, and roads which climb to the mountain, we decided to try a different route. The first right after the sign in address to the roundabout. And finally a different and unknown signal. An arrow in an upright position in front of something resembling a path in the mountain seems to indicate the way, although we’re not sure at all.

The ascent to the chapel of Puig d’ Ribes

The camera in one hand and fingers crossed on the other. We began to go down the path and a few meters, the path between pine trees becomes a path of goats. But mountain. Not there are signals that we indicate the good address, only the path. We continue climbing, and climbing, and climbing. I live in a fifth without a lift, but legs shake me. Of the chapel or trace. That Yes, the view from this point begin to be impressive.

Sometimes, after folding a bend in the road, we seem to have the Chapel to view. But not. The trunks and boulders create forms very curious. With the idea of not being this way, we found some orange peels in the ground. Well, it may be Yes road. And if it is not, at least we are left with the consolation that another fool that was also raised on this path. Although clear, he came prepared, because only carry the camera, are soaked in sweat and not have or half bottle of water that carry us to the mouth.

Has the legend, that in the Chapel of Puig d ‘ in Ribes lived in the century XIX a monk hermit. This monk was fed the food that farmers offered to make you pray for them. And them can ensure that this monk had that be very believer, because at each step that raise by the mountain, you remember more and more than Dios.

Finally, a small building appears on the pines. We have come to the Chapel of Puig d’ in Ribes. If not was so difficult… 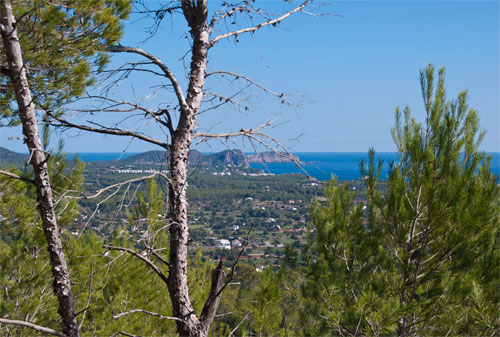 A real treasure in Puig d ‘ in Ribes

The Chapel in question is a two-room building with a gate at the entrance, an output of fireplace on the inside of their thick walls, and an altar of prints, photographs, candles, flowers and other religious elements. There’s even a small dish that serves as a brush and that we have let a few cents. Anyone who wants to come to clean the place, of course, earns it more than.

A small box that reads the title of “first aid kit” catches the eye. And a series of indications about so uncontrolled that is take is it.

Outside, small pyramids made with small stones and topped by crosses, make us think that someone had a different way of remembering their loved ones. A ride to the small house we discover that the monk in question did not have a silly hair. Eulália views, between the trees, are simply incredible. But not to the people. Throughout the North of the municipality, the island of Tagomago and good part of Sant Joan is drawn in tones green and blue. Some pines young clogged the views. Makes one hundred years, probably not were.

It is time to get off of the Chapel of Puig d’ in Ribes. Upload was a matter of legs. Get off is a matter of balance. There is that look very well where we put them feet, and seize us to some pine that is about to the road. A field very slippery in which surplus until the top of the target. Long you not glad I see an asphalt road.