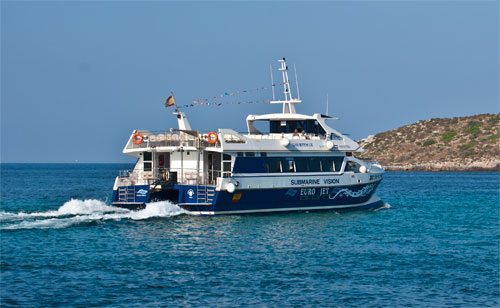 As many evenings, we have been giving a tour of the promenade of Figueretas. To the pass to the height of the Jetty have found some posters striking with the information of them boats from Figueretas to various destinations. And is that this neighborhood is one of them best releases of the island, and from its beach can access to destinations as disparate as the port of Ibiza, the beach d ‘ in Bossa, Formentera or even take a small cruise of excursion by them waters of the island.

The aquabus is a very used to traverse the city in a comfortable ride by the Ibizan coast. Especially in the evening rush hour, when taxis are saturated. Take the boat to the back is a luxury from Dalt Vila illuminated badge. The journey cost three euros and a half although we can save a little if we chose the option of return, that leaves six. Schedules are continued, beginning the exit of the first boat from Ibiza to ten in the morning. The tour will leave you in Figueretas beach or d’ Bossa. This journey is repeated every hour until six o’clock since one may until thirty-one October. Although between June 15 and September 15, is wide until one in the morning. Again we have it easy, because half an hour after the departure of the port, produces the reverse journey. Boats from Figueretas leave ten minutes after the previous. At one and media produces the output of the last ship in the season from June to September.

As a curious boat, the Capitan Hook, made a crossing cruise type from Figueretas to the port of Formentera. What of kind Cruiser seems to refer to serve sangria on Board (or that we saw on the poster). The check out time is fixed. Ten and a half o’clock from Figueretas, and a quarter of an hour later appears on the beach d’ Bossa.El return occurs at six o’clock in the afternoon. Time more than enough to bake at the amazing sands of Formentera. The journey takes 45 minutes, bleeding up, bleeding down, and twenty-three euros for adults and ten euros for children. To six years the transport is free of charge.

Visiting the South coast of Ibiza

Finally, we are left with a path that I’m willing to make. It’s a journey of about three hours of duration in which runs through the nature reserve at Ses Salines with its reserves of poseidonias until you reach the imposing massif of Es Vedrá. Ulises Cat, a boat with the glass bottom that will allow us to contemplate the seabed. A walk on the beach of is Cavallet, Ses Salines, Cap des Falcó, Sa Caleta, Cala Jondal and finally Cala D’hort. The only downside is that this boat only leaves Thursday from Figueretas beach at twelve o’clock. A quarter of an hour later made a stop in playa d’ Bossa. The price of the trip is 20 euros for adults and 10 for children.

At any crossings, it is important to know the danger of carrying children in the cart-mounted. The footbridges of ships are not the best place to have children tied to the truck and it can become very dangerous.