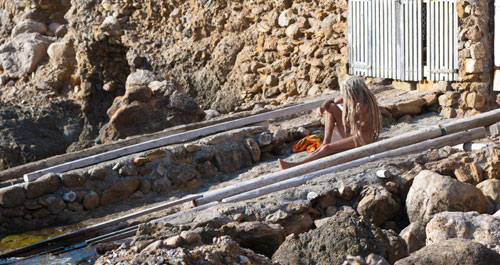 Lately we are receiving requests on the Ibiza nude beaches and coves, because there is no one official catalogue in this respect by the public administrations. Only on an official website, we have found a reference, playa de Es Cavallet, as bounded to the Nudism area. In this article we reveal the best practices of Nudism on the beaches of Ibiza.

The beaches nudist of Ibiza

If we define a beach as an extension of sand open to the onslaught of the sea in Ibiza, there isn’t many. And that we find, not can define is as indicated for the Nudism. Not without having people who may feel uncomfortable or confused. Only one, located in the South of the island, in the natural reserve of Ses Salines, can receive this adjective. We refer to Es Cavallet. An authentic paradise almost Virgin that shares its waters with Formentera. Although many have listed this beach natural as of environment gay, so certain is that is the only point of the island dedicated to this activity.

But that does not mean that we can not do naturism anywhere else. For example in Aiguas white, much people practice the almost Nudism in the slope left of the beach. We say almost, because they tend to smear the body with the sludge from the mountain, to the point where we only see a subject through mud, in the purest biblical head.

If there are not many beaches in Ibiza , is not the same with the creeks. There are no nudist coves to the effect, but if hidden corners where people campa at ease without being just annoyed. And for that there rather than move away a little from the shore and find our favorite corner. On many occasions, to explore a Creek to go fishing, we have had to move away a few meters from places that we thought deserts. Sometimes, we have spent hours without finding human trace, until we saw someone entering the water. The large flat rocks, boat ramps, a small slope in rock shelters. Any place is good to share our body with nature.

We have thus found naturists beaches such as Talamanca, in the corner farthest from the city. Cala Comte, in Sant Josep is bringing together enough supporters, especially the left section where the beach becomes more Rocky.

Santa Eulàlia offers cala de S’Estanyol as favorite place. Its large Rocky platforms that give an extra point of intimacy to the more prudish. But it is that so frequented as Cala Benirrás places, we find hidden corners to the public where to find us with nature.

And all this, without taking into account the kilometres of small coves and deserted Rocky stretches, where it will pass completely unnoticed. In the beaches and coves of Ibiza, the Nudism, no is usually practice in large masses. Predominantly more tranquillity and pure contact with nature. A do not disturb or being disturbed.

All the information of the beaches and coves of Ibiza