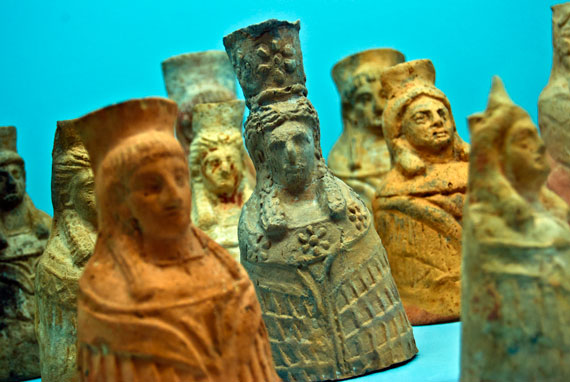 Ibiza keeps a small treasure hidden at first glance. It is the archaeological museum. We say hidden because it is virtually underground. Entry hardly seems a small store, and it is, but in the history of the island.

How to get to the archaeological museum.

It is easy, like everything else, when you know the way, but somewhat inaccessible. The Museum is located in the Cathedral Square, and there do not arrive the car or the bus from Vila. The streets are paved with bricks antique and very slippery, so access to people with reduced mobility can become a real ordeal. Not so much a rise, but much more to drop. Heels are not recommended to go to this area of the city. The direction to take is simple, always upwards along the main street. Arriving at the square, we find the House of the Curia, a point of tourist information, the Cathedral of Santa Maria, and, of course, this small building sharing the space in both buildings.

The history of Ibiza.

The Museum starts with an exhibition of maps on different places where prehistoric settlements, along with samples of the collected material from the period have been found. Items of everyday life such as pots, sharp bones, grinding stones are part of this section. Behind her, an opening reveals the remnants of the old Muslim wall on which the building was constructed.

We went to the bronze age where spearheads, various instruments and a more elaborate vessel transport us to the era.

The Punic Ibiza starts its journey with amulets and small figurines built in honor of Melqart and Astarte. It is a time of change of the 6TH century to 5th BC, where they begin to take relevant deities (very present even on the island) Tanit and Baal-Hammon. There are vestiges of two deities of great importance: Reshef and Bes. The latter is responsible for the name of the island. Very important collection dedicated to Astarte, a decorated with male attributes and especially Tanit cylindrical God, which is preserved a collection of figurines nothing despicable.

From this point of the Museum we can appreciate the cultural and social evolution of the island. Handicraft became more complex and begin to appreciate decorations. Stresses the variety of coins minted during Roman rule. Also the lamp and glass from the beginning of the first Millennium occupy an important section.

We ended the tour with several tombstones from the Arab period and three curious statues. We say curious because they will be family. They are the original whose replicas can be found along our route. Two of them at the door of Ses Taules, at the main entrance of the walled enclosure. We found the third out of the parade ground. The exit of the Museum is no less peculiar. This is done via a staircase from the rear of the Cathedral. From here the views are amazing and little known. We advise you to stop to contemplate also the stained-glass windows of the Cathedral of Santa María. Visit to the Archaeological Museum of Ibiza is priceless. You can find more information on the main tab of the Archaeological Museum of Ibiza.