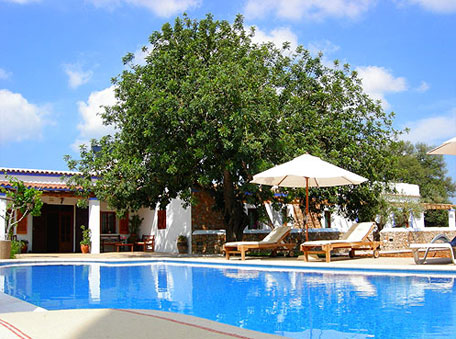 If there is a single area on the island, which has managed to preserve the aroma of the deepest Ibiza, that, without a doubt, is the area of Sant Joan. A large municipality situated in the North of the island which contains among its locations of some of the most emblematic in Ibiza. Sant Miquel is one of them, and the agroturismo Sa Vinya d’ d’en Palerm one of the privileged accommodations located in this noble land.

How to get to this rural hotel in Ibiza

It has no great loss. Agrotourism Sa Vinya d’ d’en Palerm is located halfway between Sant Miquel and Santa Gertrudis, and starting from any of the two locations to reach our destination. About four kilometers you will find a beautiful home that towers above the ground, and whose forest around extends to the feet of road. It is time to take the detour to the opposite side and delving between plows towards our destination. The second turning to the right will take us to a crossroads of orchards and fruit trees. We have reached our destination.

As a Centennial House, firm construction and recent renovation, whose rooms were part of the barns and corrals that fueled inhabitants and passengers, activities that are still present during the last century in Sa Vinya d’ d’en Palerm.
We can find rooms as Es Garrover, with its ancient carob tree. Nobody today would say that where there is a rural room that give us a bath with hydro massage, the grain was stored for later consumption.
S’Olivera, with a low olive that shelter, feeds the rest with its hydro massage shower. Curious destination for a dairy.
S’Herbasana, in the heat of the sabina, the most typical tree in Ibiza constructions and of recognized value. SA Pomera, with Apple as a point of inspiration, let us present the rural character of Sa Vinya d’ d’en Palerm.
SA Bellotera, whose name does not need translation puts an end to the set of fully equipped rooms that not indifferent to the visitor. An agroturismo in Ibiza to take into account, where picnic, swimming pool, dining and a wide range of places of rest allowed to dream about the most pleasant vacation.