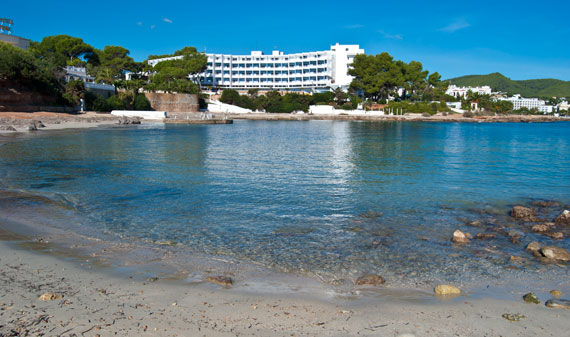 As destination tourist, Ibiza counts with a great variety of accommodations suitable for all them public. However, should keep in mind that one of the main values of the island are the beaches of Ibiza. And most of the hotels, hostels, farmhouses and apartments have been defined as beach accommodations. This definition has several differences from the accommodation in the cities. The animation tourism and the services related with any activity of enjoyment or relaxation are a priority.

Accommodation in the city of Ibiza

The municipality of Ibiza city includes three large beaches and a shopping and tourist area. In the Talamanca beach, beachfront, we find old reformed hostels, where enjoy the sea. Very close to the area of leisure and parallel to the Marina, we find a hotel zone of great quality.

The next beach, Figueretas, is aimed at a much cheaper tourism. We found the great advantage of this area in displacement scarce to get to the nightlife of the port and the bus stop. Former hotels and hostels are partitioned area.

Playa d’ Bossa presents the peculiarity of share the arena with the municipality of Sant Josep. In the area belonging to Ibiza city can find modern hotels that took advantage of the tourist expansion. Also the apartments make Act of presence.

Finally, the port area and Dalt Vila. The historic centre of the town has small buildings used in some cases as hostels and apartments. But also lyou great luxury hotels, available throughout the year, have a place in the Ibizan physiognomy.

Development host of Sant Antoni was back at the Ibiza. About their town and small hostels and apartments from the port until Caló des Moro. At the entrance, and around the Bay, apartments and hotels enjoying the coast line, until joining with neighbouring Sant Josep in Port des Torrent.

The nightlife of Sant Antoni often develop under the watchful eye of British tourists. The evening bustle of the area known as West traps in a myriad of small bars the best music of the moment.

Although Sant Antoni can boast of farmhouses. The terms municipal of Sant Rafel and Santa Agnes (Santa Ines) are propitious for this type of accommodation thanks to the protection mountainous that offer.

Perhaps due to the large expanse of this municipality, with the best coves and beaches in Ibiza, the town barely has accommodation. Instead the coast, United by the ends to Ibiza and Sant Antoni, has with multitude of hotels and apartments. In playa d’ Bossa, the environment is marked by Bora Bora and Space. Alongside them, a whole range of services at the highest level.

In Port des Torrent, those hotels continue the coast making the place in a centre tourist, almost a city of holiday.

But the coast of Sant Josep also leaves step to small and large coves where them apartments overlook to the beaches, and in some places, almost is within them, as Cala d ‘ Hort.

Talk of the town is to refer to its port sports and its Palace of congresses. This can give us a very clear idea of the tourist level that has reached the urban core. The large luxury hotels are the letter of introduction.

But also its Valley stands out for the rural hotels that share the space between Sant Carles and the villa. Surrounding the coast we also find great quality facilities on beaches presenting their credentials to the Mediterranean.

The rugged coastline of Sant Joan did not permit a very intense development of the hotel industry. However there are three very important points. Portinatx, a converted into mini City Beach. Cala San Vicente, a magical corner of crystal clear waters. And the port of Sant Miquel, a set of small coves and beaches on which some resorts appear to defy gravity.

The interior of Sant Joan is intended almost exclusively to agritourism, thanks to landscapes that have remained unchanged for centuries, and that beautiful green colour that usually produce the territories aimed at the North.

In any case, we recommend using our accommodation in Ibiza comparison to find the best deal.